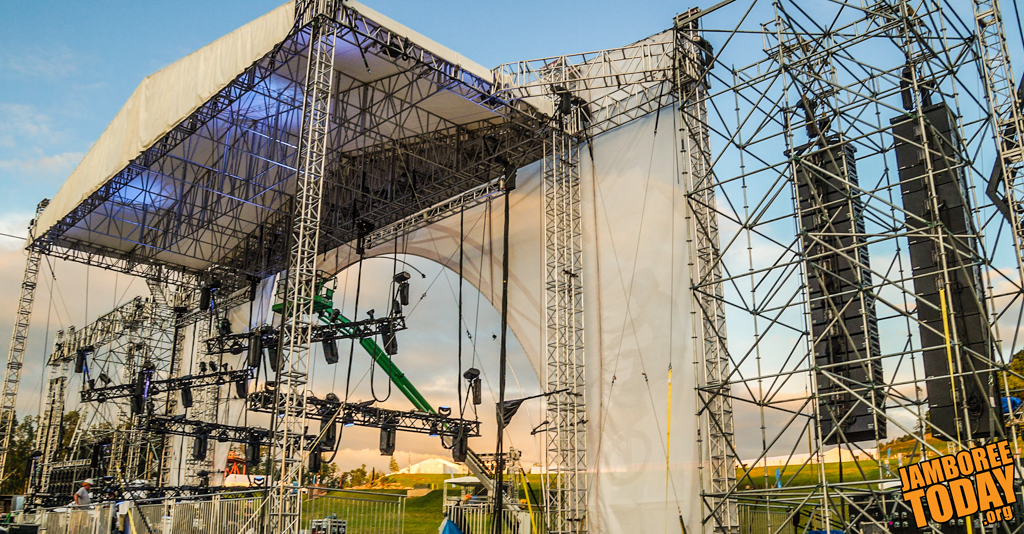 Technicians prepare the light rig on the stage at the Summit Bechtel Reserve's AT&T Stadium. Photo by Eric Vickery.

"According to weather forecasts, significant inclement weather is possible on Saturday," says Boy Scouts of America spokesperson Isaac McDaniel in a statement issued at 10:30 p.m. Friday. "Storms with lightning, high winds, and heavy rain are predicted. As a result, the program schedule for Saturday was adjusted."

The revised schedule for Saturday is as follows, and may change further due to weather conditions. Participants and visitors should watch BSA official web sites and social media channels for the latest.

The show is planned to feature chart-topping musical acts, VIP guests, and one of the largest fireworks shows in the country, says stadium experience staff member Denver Laabs.

After a week of adventure activities and merit badges, Scouts and Venturers will be wowed, yet again, by the jamboree at the Saturday night show in AT&T Summit Stadium, he says.

Additional musical acts will include the 2013 Jamboree Band, which has been rehearsing and performing around the Summit since last Friday. The band is comprised of top student musicians from around the nation.

Sarah Centeno, an artist from San Antonio who performed at the 2010 National Scout Jamboree, will also take the stage Saturday night.

"I can't wait to see all the Boy Scouts again...I can't wait to even meet some of them, it will be incredible. I love what I do and I hope they'll love it too," said Centeno in an online interview.

A keynote address is also expected from a notable Eagle Scout well known to Scouts and Venturers everywhere.

At the time of our interview yesterday, a massive fireworks show was planned close the event with launch pads in various locations near the stadium, but it may be cancelled due to weather. The display would be the 10th largest fireworks show in the country this year, says Laabs.

As previously reported, participants and visitors should remember cameras, ear plugs or hearing protection, and sunscreen, said Peter Bates, a stadium staffer working on the main stage earlier this week. Visit the restroom beforehand, he said, and most importantly bring two full water bottles.  Use of cell phones and other distracting devices are discouraged to improve the overall experience for everyone. Chairs without legs are permitted, but view-blocking items such as umbrellas are highly discouraged.

For Scouts and Venturers camping at the Summit, AT&T Stadium is no more than 45 minutes from the most distant base camp and only a 10-minute walk from closer camps.

Estimated travel times from base camps to the stadium:

No matter what distance from the stadium, all participants and visitors are reminded again to bring plenty of water and to refill their water containers before arriving for the show.

Given the inclement weather forecast, all participants and visitors should arrive prepared with appropriate rain gear.

The original meal service schedule for today has also changed, according to McDaniel in last night's statement. It is as follows: