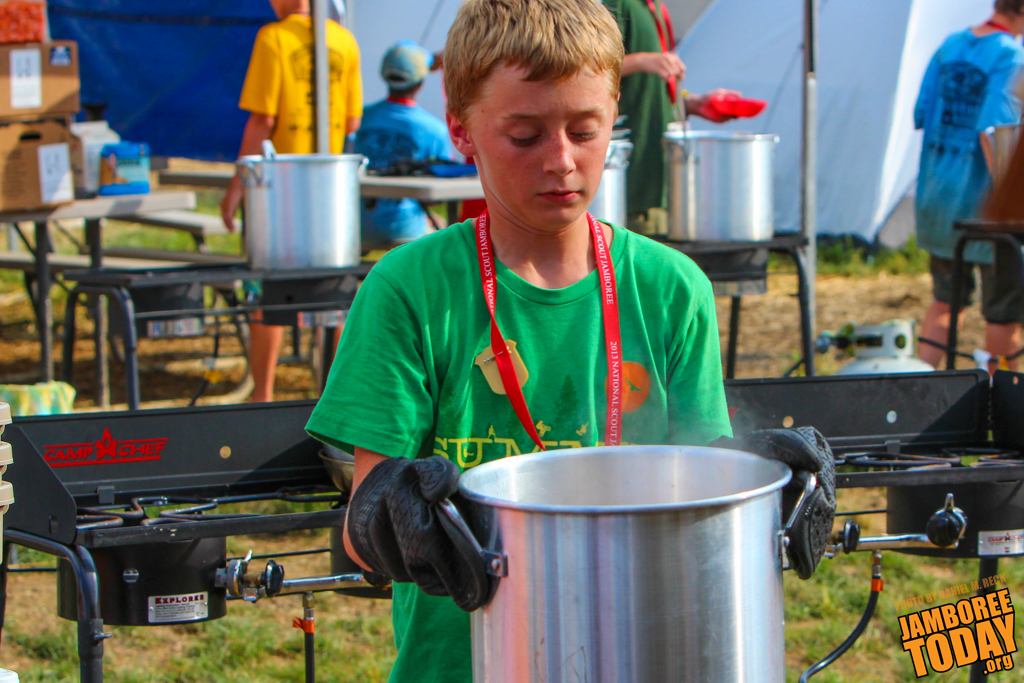 A Scout prepares lunch for his fellow campers in Camp Delta. Photo by Daniel M. Reck.

Nearly 20 18-wheelers full of food and 250,00 pounds of ice are only a small portion of what goes into daily food operations at the Summit Bechtel Reserve, says Eagle Scout Ray Porter of Waxahachie, Texas., the media and communications manager of the 2013 National Scout Jamboree food team.

"It's a tremendous undertaking. If the food [team] screws up, everyone's upset" says Porter describing the food team's planning and logistics that began immediately after the 2010 National Scout Jamboree ended at Fort A.P. Hill, Va.

For participants, a few things have changed since 2010. Mainly, daily lunch is now in the form of a "Summit 2-Go Lunch," which Porter describes as  a nutritious, portable meal package that can be eaten at individual convenience. One of these lunch packages will be served to each Scout or Venturer as they step off the bus on the first day of the 2013 National Scout Jamboree.

Breakfast and dinner in participant camps works similarly to the past; units have an hour and a half for each meal to cook food that is picked up at each base camp headquarters.

Also new at this jamboree, participants, staff and visitors will have access to retail food snack-bar areas in Summit Center which offer a supplement to the "three square meals" already served each day, says Eagle Scout and national food team chairman Squire Lang of Marshall, Mich.

The challenge of providing 40,000 people with food at a location that is much more remote than Fort A.P. Hill is "a combination of responsibility and excitement," says Lang.

In addition to the services of Compass Group, a food service management company, the Food Team has over 500 volunteer staff members, 100 of whom work to supply the 2,700 seat staff dining hall.

Comparing 2013's food operation to the past, Porter says, "this is the smoothest one in recent memory."