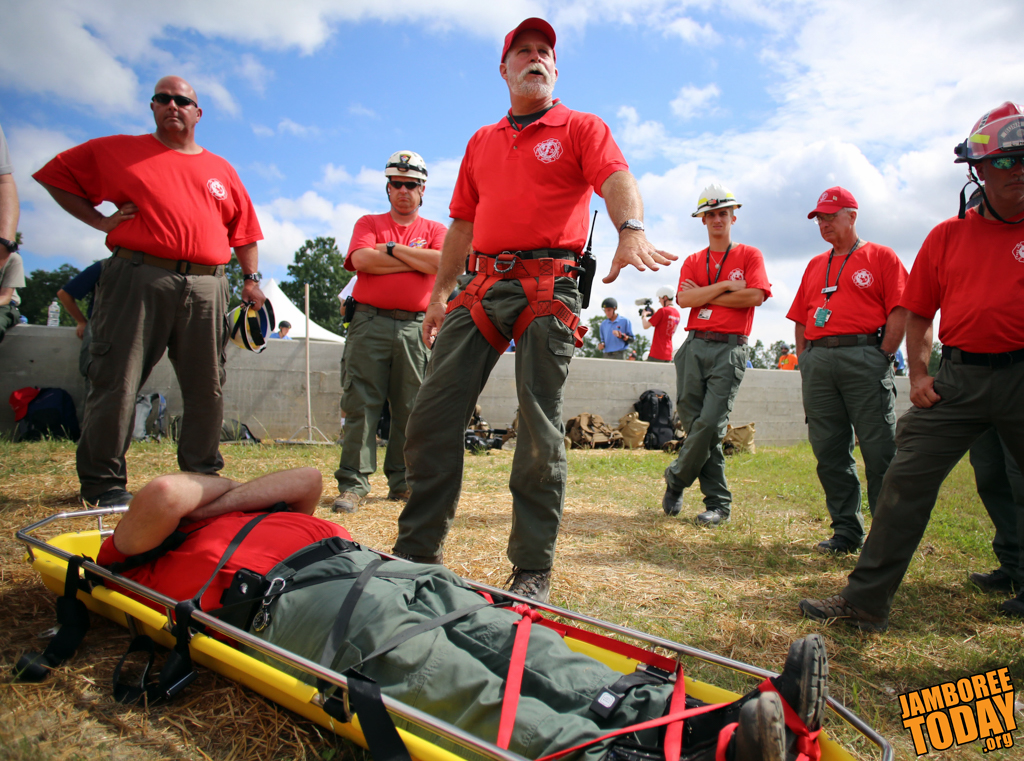 Kenneth Larson (center), head of search and rescue, demonstratees how to properly lift an injured person during a training session. BSA photo by Al Drago.

Fire, Rescue Teams Ready for Anything

With tens of thousands of participants and visitors at the 2013 National Scout Jamboree, the Summit Bechtel Reserve's fire department is on call 24/7.  They stand prepared for actual firefighting duties and will assist Summit emergency medical and rescue teams to rescue and treat patients injured in remote locations.

"Our volunteers have a vast amount of experience," says John Hoffman, director of jamboree fire service operations. Hoffman is also fire chief of the Washington Township in southern New Jersey. The jamboree's firefighters come from 18 states and the Mount Hope Fire department loaned one fire truck for the duration of the jamboree.

The firefighters are joined by a group of seven active-duty Air Force para-rescue jumpers who can be called in to recover injured people in remote areas. Other military services are also contributing to the rescue and treatment capacity at the Summit.

"Emergencies are first handled by the Summit staff until they request specialized service," says Tech. Sgt. Tony Mercado, an Eagle Scout. The Army has flown in several Blackhawk helicopters allowing para-jumpers to transport virtually anywhere to rescue and fly injured participants to a medical facility.

On July 13, all three battalions of the Summit fire department participated in a training exercise demonstrating how to correctly secure patients on a litter for transport at a steep or vertical angle, often encountered on the slopes of the Summit's wilderness. Although these firefighters have extensive knowledge in rigging patients for transport, they routinely practice their skills.

The exercise took place by The Park skateboard area. A steep, 45-degree angle hill south of The Park was used. Mock patients were carefully loaded onto a litter and then immobilized to prevent further injuries. A rope was tied to the litter with a butterfly knot. Four firefighters lifted the patient and walked uphill. The rope traveled through two pulleys anchored to a Mount Hope Fire Department command vehicle through two prusik knots that act as safeties, then to another team that acts as a counterbalance. Like an elevator, the counterbalance or haul team traveled downhill to make it easy for the litter team to ascend the grade. A safety officer oversaw the whole procedure, ready to halt and redirect the operation if a dangerous situation arose.

Hopefully, these rescue skills will never need be used during the jamboree. Nonetheless, the Summit's firefighters are ready for anything.