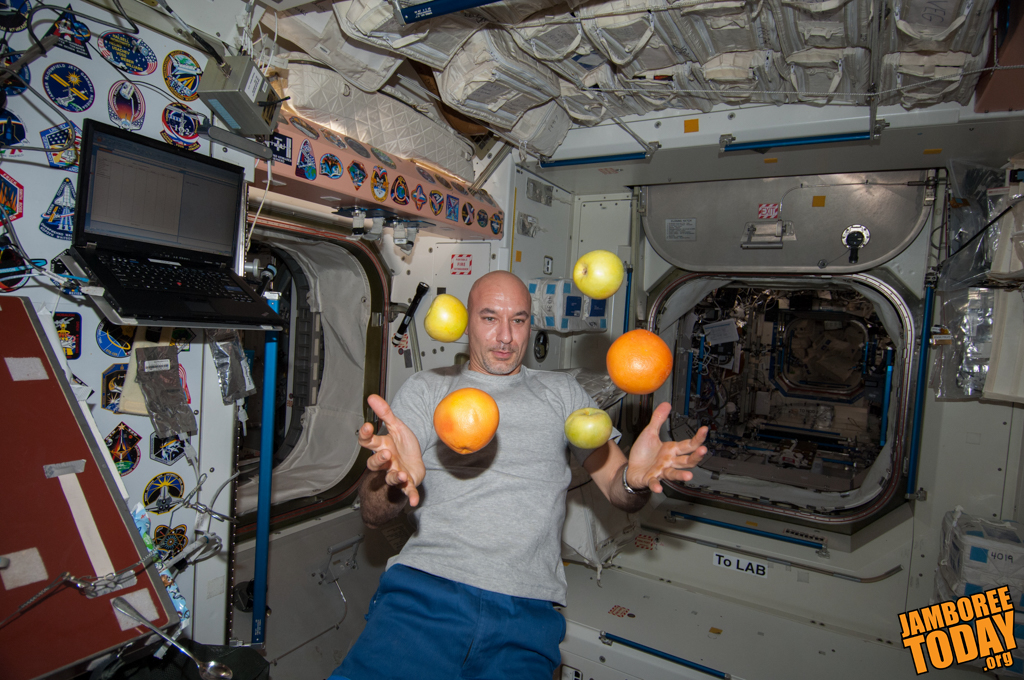 Italian Air Force Maj. Luca Parmitano "juggles" fruit aboard the International Space Station. Parmitano used a ham radio aboard the station to speak with Scouts on the ground at the Summit. NASA photo.

"November alpha one sierra sierra, this is kilo two bravo sierra alpha, from the Summit Bechtel Scout Reserve in West Virginia, over over." said satellite radio operator Mike Sprenger (W4UOO) at the K2BSA station set up at the 2013 National Scout Jamboree. Sprenger was transmitting beyond the Summit, beyond West Virginia, even beyond Earth itself. For the first time, on July 20, amateur radio contact was being attempted between the Summit and the International Space Station.

"When I came to the jamboree, I never thought that I would be able to talk to somebody in space," said Gavin Coyle of Nampa, Idaho.

After several attempts, contact was achieved at precisely 11:34 a.m. as Parmitano's voice crackled through the static.

"November alpha one sierra sierra, good morning, and I am waiting for your questions," said Maj. Parmitano. Ten Scouts who had completed the Amateur Radio merit badge at the jamboree then asked questions provided by NASA.

"How are robots used on the space station?" asked Kyle Jones of Forest Grove, Ore.  The next question came from Will Wyland of Redding, Conn., who asked, "How do you communicate with your family while you're aboard the space station?"

After the nine-minute contact with the space station, Hometown News hosted a press conference.

"I put this experience as an out of this world experience," Tyler Pincus of Oro Valley, Ariz. said. "It was really amazing, and I'll remember it for the rest of my life."

Andrew Brazeau of Putnam Valley, N.Y. summed up the extraterrestrial chat: "This [was] a once in a lifetime experience, and I will probably never do something like this again."