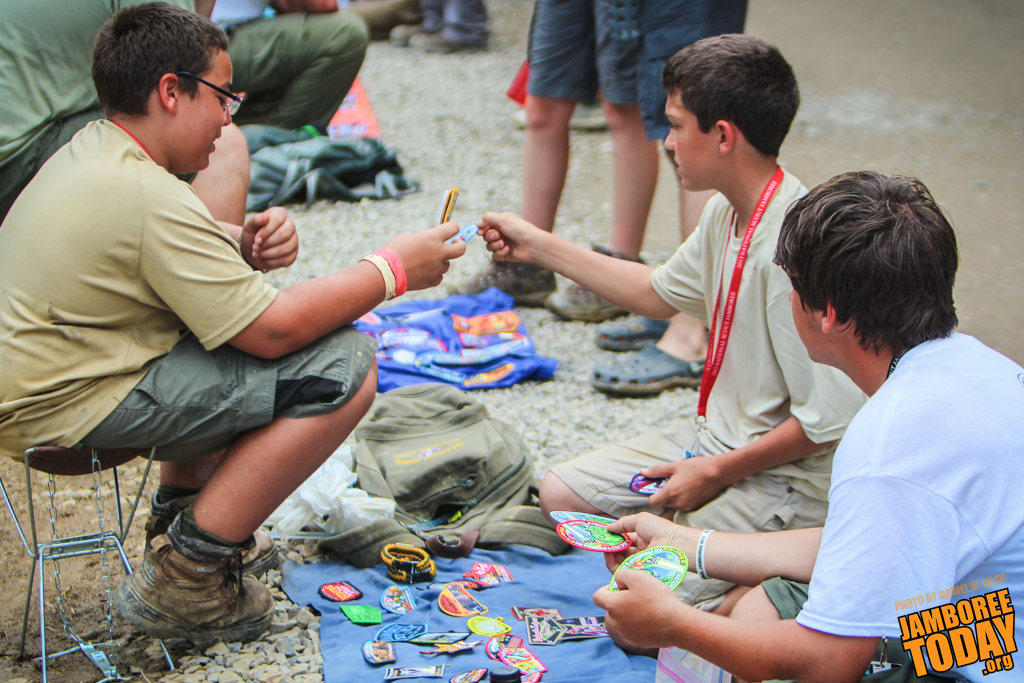 Scouts and Venturers trade patches by the hundreds on the path leading to Goodrich Lake. Photo by Daniel M. Reck.

"Patch trading should be one patch for one patch," says Gumby Petersen, patch trading staff member and patch trader himself. Patch swapping has always been a staple of jamboree activity, this year's is the first that patch trading is programmed for a specific location at specified times and overseen by designated staff. Patch trading is scheduled for several evenings during  jamboree, from 6-9 p. m. on the AT&T stadium lawn.

"The bottom line of patch trading is to make friends," Petersen says. Therefore, patch trading continues all over the Summit, as well, as Scouts and Venturers make friends in their camps, along paths, and in other activity areas.

Unlike previous years, though, adults and youth may trade with one another the sanctioned areas with staff supervision. In previous years, trading was only allowed within each age group. Now, patch trading staff members help assure that patch trades are fair.

Collected patches are often treasured for years, and all traders should focus on fairness, developing friendships, and having fun.

Nearly any patch can be exchanged — council shoulder patches, Order of the Arrow pocket flaps, and other patches — between Scouts, Venturers, and Scouters.

Patch trading can be fun and interesting, however, traders should be wary of fake patches. For example, patches exist for the non-existent Cayman Islands Council. Patches of this nature can still be fun to trade if everyone involved is aware of their authenticity. Patches of Scout rank, Venturing awards, and titles (such as Senior Patrol Leader) should generally not be traded, although Scouting VIPs like Chief Scout Executive Wayne Brock are handing out commemorative patches similar to the ones they wear on their uniforms.

Roadside patch trading  is not forbidden at jamboree, nor is trading restricted to the stadium, but Scouts and Venturers are urged to use their program time to participate in the wide range of  activities which jamboree offers they may not find at any other place. Patches, of course, can be traded anywhere at any time.