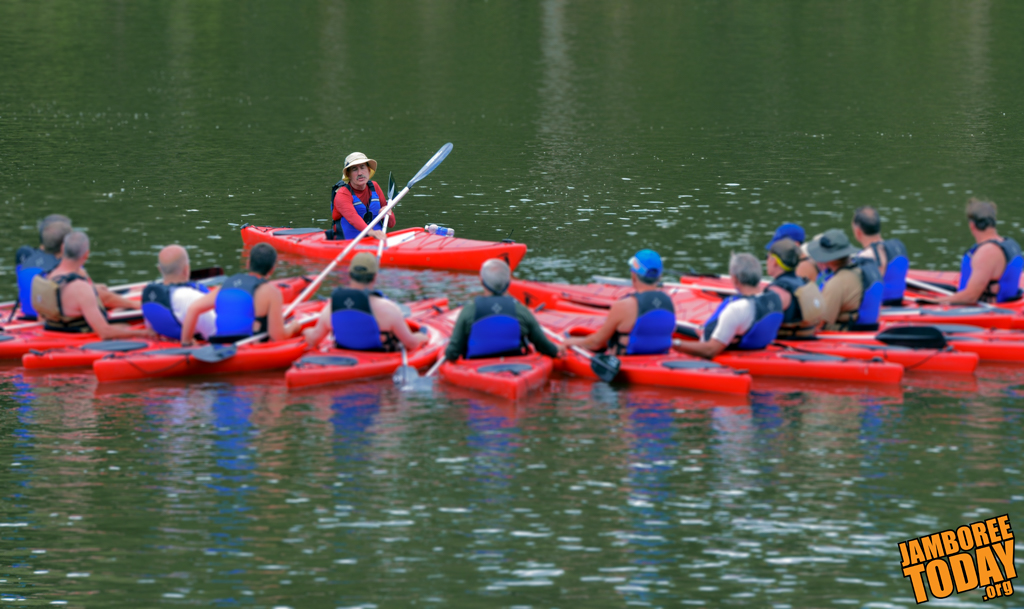 Tuesday is the last chance for Scouts to earn dual kayaking awards at the 2013 National Scout Jamboree.  Star Scout Michael Warner is one jamboree participant who has already earned both the Kayaking merit badge and the Kayaking BSA Award at the Summit Bechtel Reserve.

"I love kayaking, and it's really easy for me," said Warner, of Phoenix, Ariz. "I don't really know [why]. I guess it's because you only use your arms, not your legs."

Warner was one of nine Scouts earning the two recognitions Saturday. As part of their training prior to getting in the water, Kayaking instructor Tim Conway of Owen, Wis., reviewed some of the basic skills required for the merit badge, including knots and first aid as well as going over symptoms and treatment of heat stroke and heat exhaustion.  The kayaking venue has a dozen instructors waiting to teach Scouts everything they need to know to be safe and have fun on the water. Venturers may also participate and learn, although they are not eligible to earn merit badges.

Any Scout who wants to earn both awards can do so in a 2 1/2 to four-hour course at the kayaking location on the east side of Bravo Lake. Hours are 8 a.m. to noon and 1-5 p.m. It's a walk beyond Summit Center to the lake, but for those willing to take the extra steps, the effort seems to be worth it. Not only did Saturday's graduates enjoy their time on mdash and in mdash the water, they were happy to earn their two awards.

Bravo Lake has two kayaking sites mdash one for recreational kayaking, another for advanced kayaking, both of which are considered lake or flatwater kayaking, said Kevin Cordray, the kayaking leader from Orange, Va. The advanced venue is where Scouts work on the two awards.  Kayaking on Bravo Lake also users red and yellow buoys to challenge Scouts to paddle straight, pivot, and take sharp turns, he said.

Equipment includes 250 Current Designs Kayaks consisting of 12-foot Kestrels and 14-foot Whistlers built of polyethylene.  Mike Cichanowski, owner and founder of Wenonah Canoe, the Winona, Minn.-based watercraft manufacturer of the jamboree's kayaks, said the paddles were specially designed for the BSA. Of course PFDs are provided as well.

"I liked it. It was very enjoyable," said Banick. "I think I might try it again."

Life Scout Seth Beatty of Loraine, Ill., said he was optimistic about the kayaking before he even arrived here, saying, "It's going to be better at the jamboree. It's like a better experience."

Life Scout Kristofer Alme of Phoenix, Ariz., added, "It seemed like it would be a really fun merit badge to do. The setting was better for kayaking than other places."

The group was nearly unanimous about the fun they had flipping their canoes, then emptying them out with the help of a buddy in another kayak. Scouts also learned the parts of a paddle and kayak, and performed underwater somersaults and "wet exits," the latter of which is a quick way to slide out of a kayak if it were to capsize.