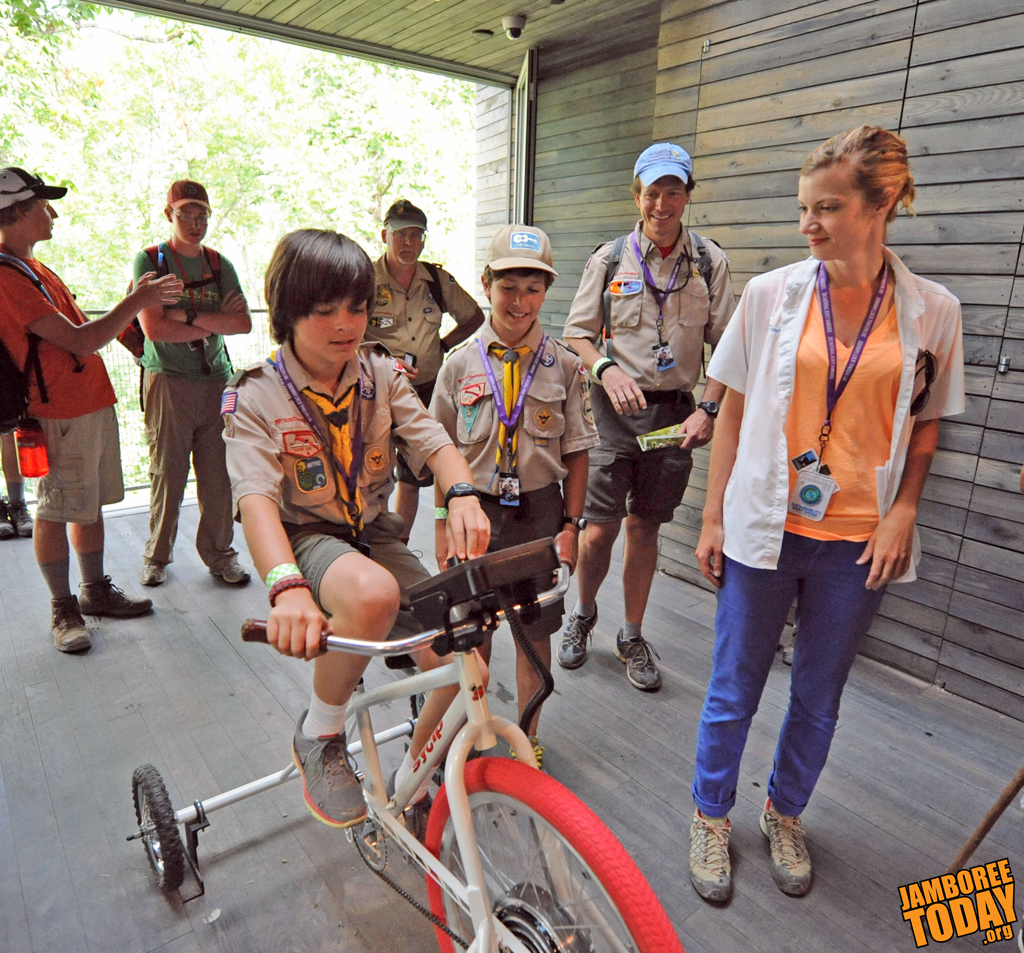 Sustainability Message Branches Out From Treehouse

Living in a treehouse is an adventure every kid dreams of. But it takes more than trees, a house and an idyllic vision of outdoor living to enjoy life and protect the Earth.

What completes the picture is something called sustainability, which has many meanings but here at the Summit Bechtel Reserve relates to a lifestyle involving the use of resources so they are not depleted or permanently damaged. That's where the Sustainability Treehouse in the Summit Center comes in. According to the BSA, the tree house is the centerpiece of Scouting’s commitment to sustainability.

The tree house was "the first building completed on the Summit site," says Cristina Ramiriz, a Sustainable Treehouse staffer from San Juan, Puerto Rico. Ramiriz is one of a crew of staffers who scamper between the tree house's five levels to answer visitor questions about the unique structure, its functions and contents.

When asked what she liked most about the tree house, Mary Claire Halbrook, a Venturing Bronze Award recipient from Albany, Ga., at first was at a loss for words. "I don't know," she says. "I loved it all."

Visitors can discover how trees, a forest and the tree house itself provide meaningful examples of sustainable stewardship they can copy. The tree house is designed to generate as much energy as it uses through solar panels, wind turbines and geothermal energy, the latter of which recovers heat or cool air from underground. The building also captures and treats rainwater and waste water so that it is considered a net zero resource-consuming facility.

For the unfamiliar, a wind turbine is a windmill-like structure specifically developed to generate electricity. It can be seen as the next step in windmill development.

Standing 125 feet tall and featuring 4,000 square feet of interactive exhibits, the steel and wood tree house has sparked passion in the hundreds of daily visitors as to how everyone should consume energy conservatively, recycle resources like water and human waste and use earth-friendly building materials.  Aside from being a building that rises to the sky with surrounding trees, the tree is depicted and described in tree house exhibits as an icon that easily communicates the idea and message of sustainability.

"A tree doesn't use more resources than it creates," says the text on a treehouse second-floor display.  "We like trees so much that we decided to model this building on them and also construct this building from them in part."

Unlike Halbrook, fellow Venturer and Life Scout Jesse Griggs of Americus, Ga., had no trouble giving his opinion on the tree house.

"I'm gonna run my house off of solar power and I'm going to have rainwater" used for household sanitation like the treehouse does, Griggs says. "I'm all into that. I love free." Griggs also said the comparison of incandescent light bulbs vs. fluorescent was "pretty revealing."

What motivated him to think about sustainability?

"I'm a big fan of Henry David Thoreau," Griggs says. "To live simply, you have to be efficient. That's why I feel the way I do about solar power."

Along with Halbrook and Griggs was Noah Phillips, Venturing Bronze Award recipient of Albany, Ga., who says he enjoyed the Recyclotron, a clinking, clattering contraption on the third level that uses balls and rails to demonstrate how energy performs.

Other tree house attractions range from a toilet that uses rainwater for flushing rather than plumbed-in liquid to a modern sculpture to which visitors can add permanent sustainability messages. Of course, the toilet accepts no visitor "deposits", Treehouse staffer Lyn Gemperle tells visitors, and the sculpture is composed of keychain-sized aluminum plates that visitors scrawl personal messages on.

Above the top floor — an open floor plan — are wind turbines and solar panels to collect energy for powering the tree house.

"I liked the top with the sculpture best," says Life Scout Zach Van Es of Sparta, N.J. He said he was also impressed by the number of Scouts "who care about the environment."

"Concrete is usually the main element of a building," she says with the translating help of her fellow crew members.