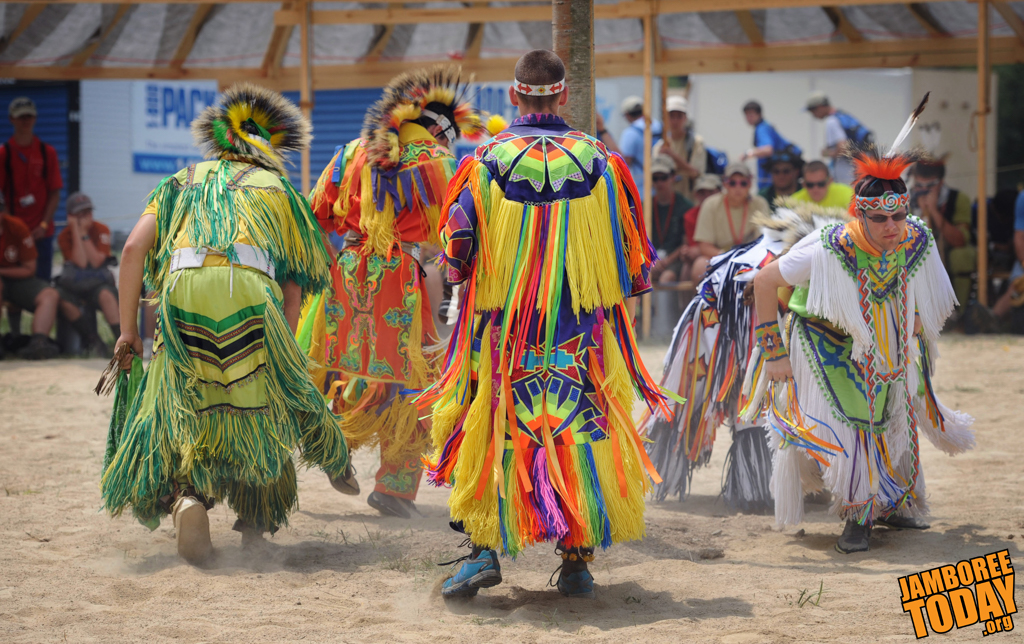 Members of the Order of the Arrow perform a Native American grass dance as part of an educational program at the Garden Ground. BSA photo by Jeff Hattrick.

"The Garden Ground is the only place in the Summit every Scout will visit," said Jeff Kosik, Garden Ground director. It is a unique experience; featuring different themes and "villages" for including pioneering, the Buckskin Village and the Native American Indian Village.

Each troop or crew that hiked to Garden Ground on their mountain trek day journeyed to the top is over two hours. There, the Scouts and Venturers were welcomed by a sign refers to the place as "The Summit of the Summit." As long, and sometimes grueling, as the hike might have been, it was well worth it.

The most popular area was the Highland Games, where Scouts, Venturers and even staff took part in Scottish heritage and games. The Games included the caber toss, where Scouts threw tree-sized poles; the hammer throw; tug-of-war and many other Scottish events. Participants also interacted with the kilt-wearing staff running the games — many of whom are actually visiting from Scotland — and Scouts and Venturers could even learn how to properly wear a kilt on themselves.

"I make my work for decoration and display, not profit," said Herndon. "It is all to show the scouts and help them learn about culture."

Scouts and Venturers who missed the Garden Ground at this jamboree are invited to return to the Summit Bechtel Reserve for the 2017 National Scout Jamboree, perhaps even as staff members for the Garden Ground.