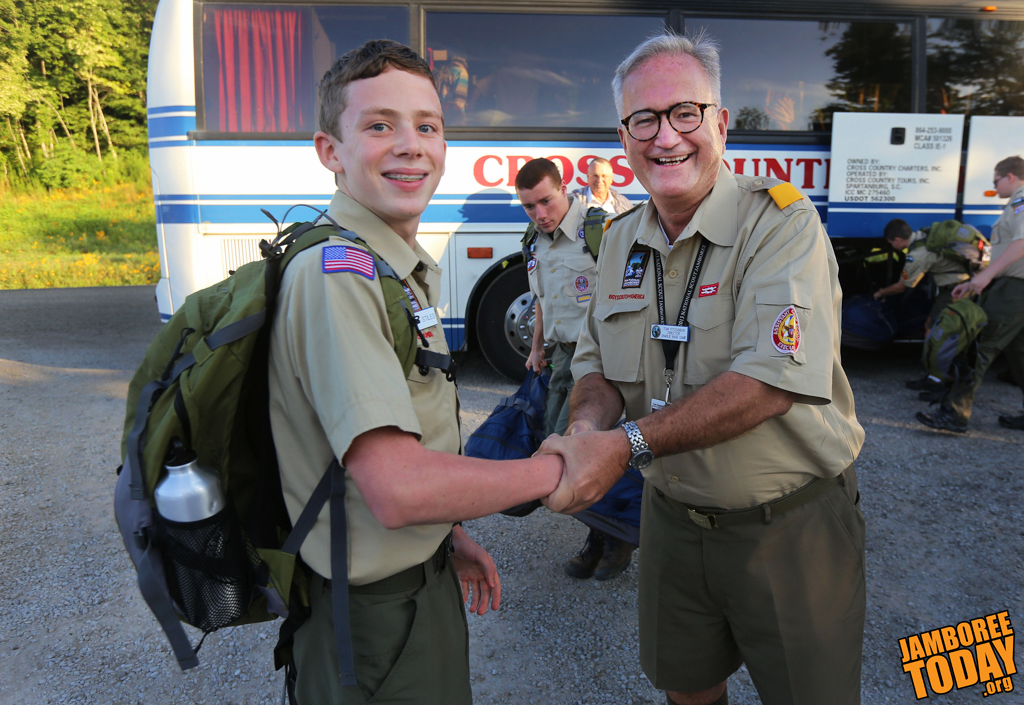 First Class Scout Vance Stiles may have been the first Scout off the bus at the 2013 National Scout Jamboree, but he has had as much fun as anyone else here.

When he arrived at the jamboree, Stiles said he wanted to meet new people, trade patches, and all the fun activities here.

"Definitely exceeded my expectations," says Stiles. "It's amazing how developed they are."

He said he enjoyed firing a 9-mm pistol rather than a .22 rifle because, even though the 9 mm has a small kick, it is easier to control.

As for Monday night's fireworks spectacular: "Those were nice. That was definitely on a par with, if not a little bit better [than Disney World]," he says.

Unlike some other participants, Stiles was stoic about the frequent rain and mushy mud at the Summit Bechtel Reserve.

"The rain nicely cooled us off, but it has not done well to our campsite," Stiles say, where straw was spread over puddles and black mud before the troop packed up this morning.

Overall, Stiles says, "The weather was fine." As long as people "manage the mud, it's fine."

What would he say to Scouts in his troop who didn't attend the jamboree? Moreover, would he return?

"I'm going to tell them they should have come," Stiles says, "and ... we should come back as a troop."  He added he would be interested in returning to experience a high adventure camp, 10 weeks of which are scheduled at the Summit in 2014.

"The staff here has been wonderful," he said. "The work people put in has made this a great jamboree."

Once Stiles leaves, he'll be able to snooze on the bus home. Even so, Stiles said, people camping don't require as much sleep.

"You've got the camping adrenaline," he said. "But yeah, I'll sleep when I get home."

Stiles is also looking forward to a hot shower and "real food," such as stir-fried chicken.