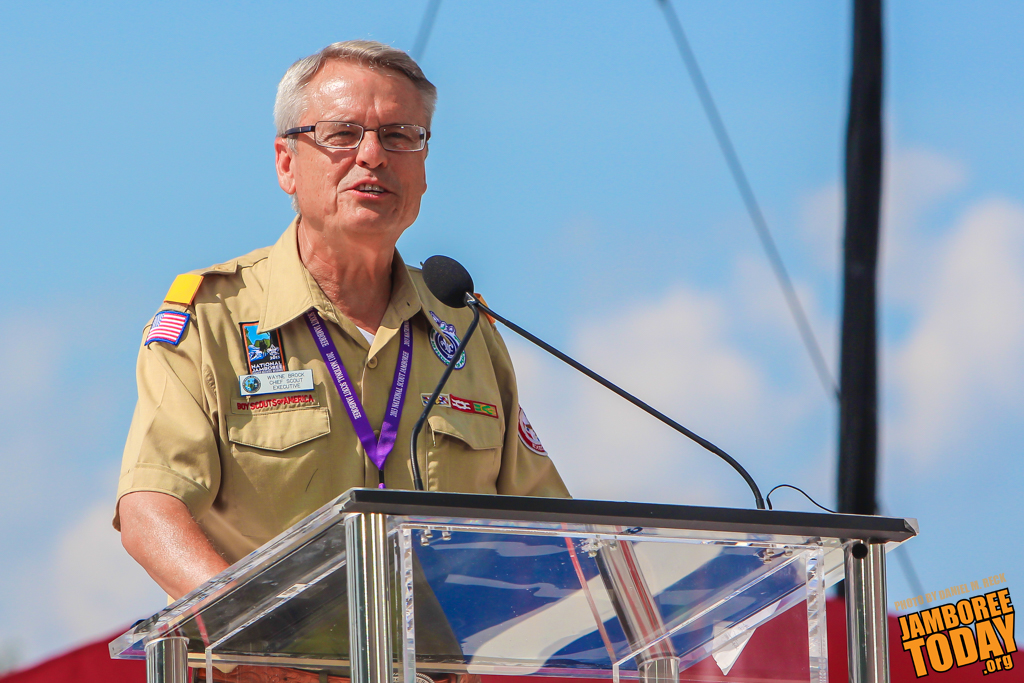 He speaks from many years of experience, beginning as a Scout himself, and has passed the Scouting passion down through his children, hopeful that it will continue for generations to come.

Like the rest of us, Brock has been hoofing it throughout the jamboree site, but he has been doing so not just to get from one spot to another, but to meet and greet Scouts and Venturers wherever he goes.

So how does he know the jamboree was fantastic?

"The excitement I see in the kids that are here ... the smiles on their faces ... they just seem to be having fun," he says.

The reaction he's getting from participants about this event?

"They were saying how this just feels like a camp," Brock says. "To them, the property seemed to bring people together. I don't know if it's because of the hills and the valleys or whatever, but that's the feeling they got from it.

"Of course they love the activities, and every boy seems to have his favorite ... whether it's water sports or whatever."

As for Brock himself, "I never went to a jamboree as a kid." However, he has made up for it as an adult; this is his fifth national jamboree.

"My first one was in 1981 when I worked on the subcamp staff," Brock said.  "Now my son has been to two jamborees as a Scout."

Brock's son, Richie, also attended the jamboree, as did Brock's wife, Ernestine. The Brocks also have a 17-year-old granddaughter, Katie, who also was at the jamboree.

"Maybe I can convince her to be a Venturer now that she's seen this," Brock says.

Besides the tried-and-true medium of face-to-face communication, Brock was using his iPhone to tweet his experiences throughout the jamboree; he also writes and posts daily blog entries to the "Chief's Corner".

"And I have my jamboree app to get around the jamboree," he said.

Having grown up in Scouting and worked 41 years as a BSA professional, Brock's love for Scouting is obvious and runs deep.

As a youth he served as senior patrol leader of Troop 453 of Kinston, N.C.

"I was the first Eagle in that troop," he says proudly.

When not wearing his hat as Chief Scout Executive, Brock, 64, of Flower Mound, Texas, said he loves to go boating. The family has a houseboat and two Sea-Doos.

"I just love being on the water," he said. "I like to swim. I like to fish. I like just about everything that has to do with water."

Not coincidentally, Brock worked on the waterfront when he was a summer camp staffer teaching canoeing, rowing, swimming, and lifesaving.

Surprisingly, as an active Boy Scout, Brock was unaware that professionals worked for the BSA. It wasn't until his sister married a professional Scouter that he learned they existed.

"Of course I loved Scouting. I just thought it would b a wonderful place to spend my life and have a career," he said.

Looking forward, Brock said other major changes are expected to help shape Summit activities and adventures. Other opportunities will allow people not registered with the BSA to visit the Summit and "get a taste" of it, Brock says. This could involve weekend stays for non-Scouts who would later "buzz" their experiences to others.

"We've only seen the beginning of the Summit with this jamboree," Brock says. "We'll eventually have a leadership center here. That's not in the immediate future, but the far future.  The next thing in the immediate future is to run a high adventure program next summer," which is slated to accommodate up to 25,000 Scouts.

Brock noted that the Summit will not duplicate programs offered at Philmont, Sea Base or Northern Tier.

"This is completely unique, and that's what is so great about this property," Brock said. "Another thing that's unique about the Summit is the way we'll be able to integrate technology into the outdoors.

"Here we encourage kids to bring their cellphones, not leave them at home," he continued. "We want them to take pictures. We want them post them on Facebook and Twitter so they can tell the rest of the world what Scouting's all about."

Brock said youth who join scouting today have never lived in a world without personal technology.

"To ask them to leave that at home ... unfortunately ... sometimes, if they could choose between one or the other, they would choose to stay at home with their technology," Brock said.  "I just think we can use technology as a way to introduce kids to the outdoors and enhance their outdoor experience — not replace the outdoors — or de-emphasize it.

"And I think we're showing at the Summit we're doing exactly that."