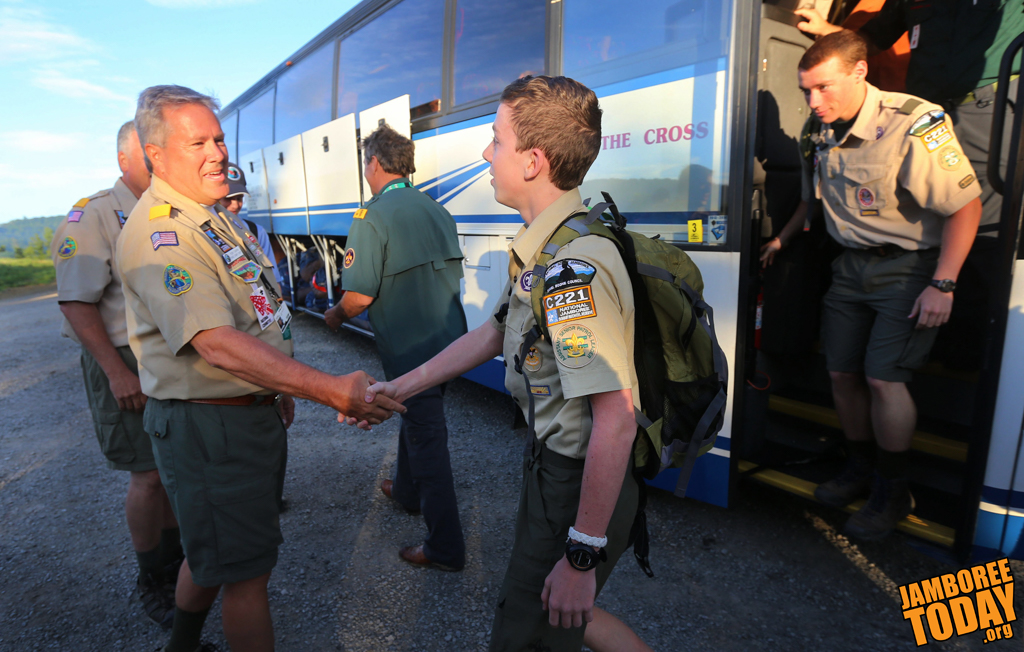 As Vance Stiles hoofed it off a tour bus here at about 7 a.m. today, the First Class Scout from Black Mountain, N.C., stepped into history.

That's because Stiles was the first Boy Scout to step off a troop bus for the inaugural national Scout jamboree at the Summit Bechtel Reserve. From 1981-2010, the jamboree was held at a military post, Ft. A.P. Hill, Va.

Stiles said he came to the jamboree at the Summit because he wanted to "meet new people, trade patches and enjoy all of the activities."

The troop assistant senior patrol leader and the other 35 members of jamboree Troop C221 from the Daniel Boone Council left Asheville, N.C., late Sunday at about 11 p.m., so Stiles can't really say whether he really had to wake up to travel here; he already was. But be assured, Mom, he said he did snooze now and then during the trip.

After about a five-hour ride, the troop's bus was still cruising in the dark when it drove past by a flashing highway sign outside of Mt. Hope that said "Be prepared to stop."  So, the bus did. Then at about 6 a.m., the bus cruised through registration and past several West Virginia state troopers as it drove onto the Summit property. 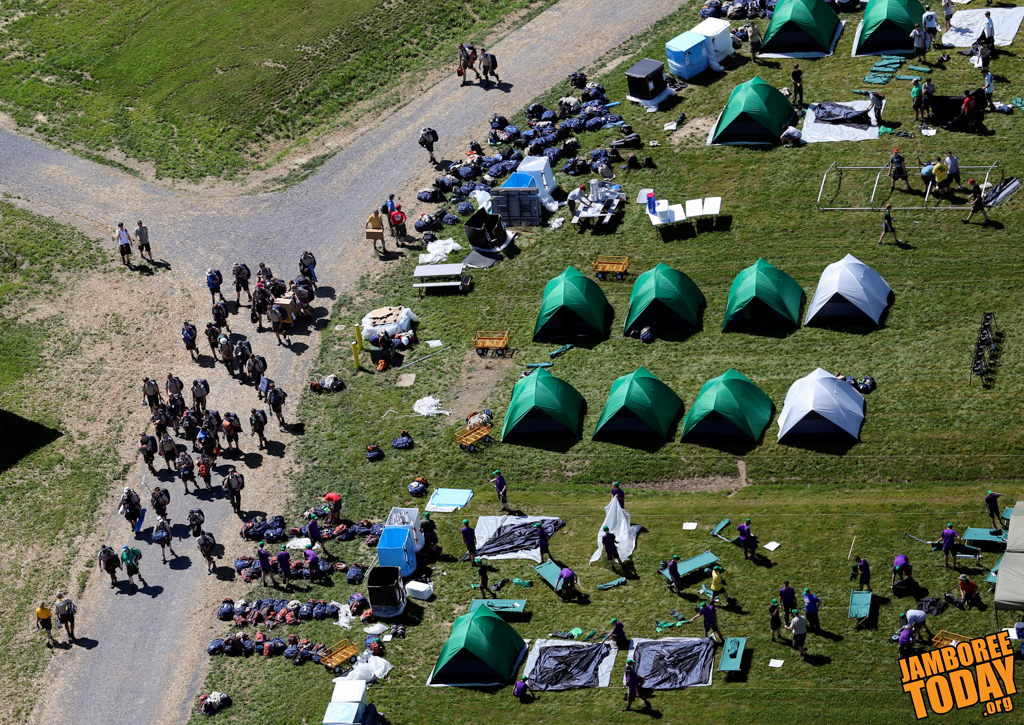 "Welcome on behalf of the entire jamboree staff!" boomed Alexander Call, Eagle Scout, of Corpus Christi, Texas, over a microphone on the bus' public announcement system.  Call and fellow Arrowman Reece Bennett, were two of 400 Order of the Arrow members whose job was to bring cheer, build anticipation and pass along a few important reminders, such as drinking water and traveling with a buddy, but not to bother the wildlife.

Joining Stiles and his troop on the first bus was jamboree Venturing Crew F602C, of which three of its members have Down syndrome. Venturing crew Adviser Randall Barnett said he has attended 10 jamborees, but this is the first he has been able to bring Down syndrome Scouts.

During their on-board remarks, Call and Bennett passed along information about the Summit property, jamboree program offerings and interesting trivia.

"One of our special guests at the jamboree will be the King (Carl XVI Gustav) of Sweden, who is honorary chair of the World Scout Foundation," Call said.

Call and Bennett also mentioned that when locals saw all of the heavy equipment being brought into the Summit, they thought a bunker was being built to protect the president in case of a nuclear strike.  In fact, an underground bunker had been built in West Virginia. Known formally as the U.S. Government Relocation Facility, the facility is widely called the Bunker.  The Cold War-era Bunker is at a luxury resort near White Sulphur Springs, W. Va.

Carved deep into the mountainside beneath our West Virginia Wing is an emergency Cold War fallout shelter. Once a top secret U.S. government relocation facility for Congress, the Bunker at Greenbriar is now open to anyone interested in reliving a legendary piece of The Greenbrier history. Bunker tours provide a unique and in-depth look behind the hidden doors and lets you explore an aspect of The Greenbrier that no other resort can claim. 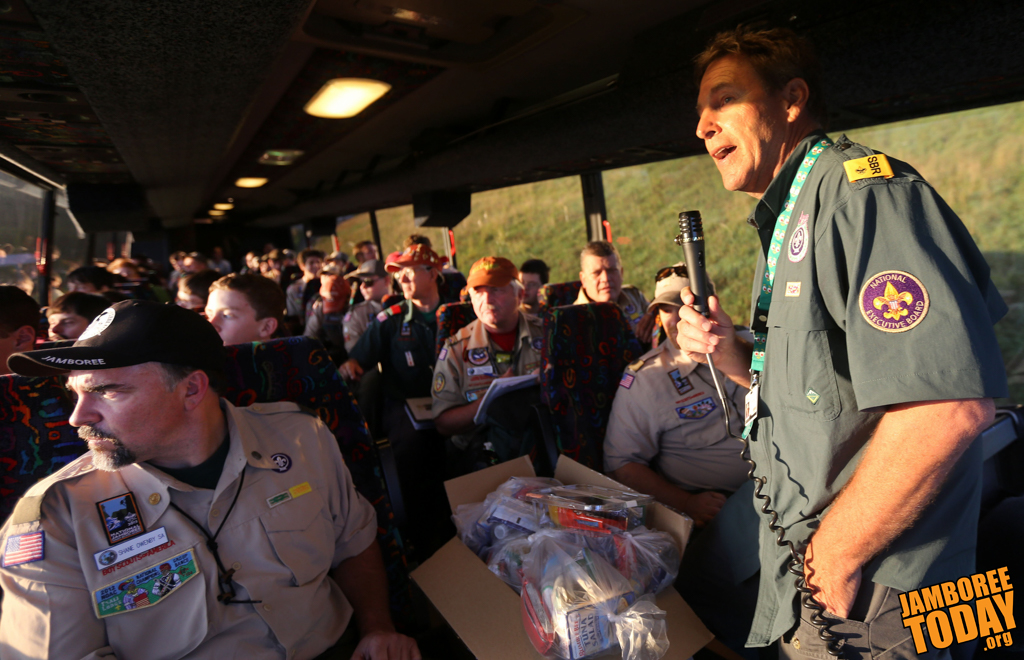 Another special guest -- of sorts -- jumped aboard the bus when it stopped at one point: Jack Furst , who was chosen in 2007 to design and build the Summit.

Furst said he manages all BSA high-adventure properties (Philmont, Sea Base, Northern Tier and now the Summit). He said he has worked 80-hour weeks over the past several years to ready the Summit for the jamboree. Moreover, the BSA has a goal to host 25,000 Scouts yearly in a high adventure and summer camp program, he added.  High adventures begin next year, summer camp in 2015, he said.

Jamboree registrar Lonnah Curry of Mt. Hope, who rose at 3 a.m today, said a pair of OA guides boarded and rode each of an estimated 800 to 900 buses onto the Summit to welcome participants.

"Remember guys; this is history here," says logistics coordinator Preston Marquis, an Eagle Scout from Norfolk, Va., who spoke to OA guides in the early-morning darkness. "You'll be the first ones taking buses onto the Summit property."

Russell Smart, jamboree program chairman of Greenville, S.C., said he approached the OA to have members greet participants, a departure from the past.

When the bus pulled into sub camp "Charlie 2 Royal" at 7:02 a.m., Toby Capps, base camp chief, Commissioner Steve Bradley, and assistant Commissioner Terry Pew were all on hand to shake Stiles' hand as he stepped off the bus.  In fact, they shook everyone's hand as they exited the bus. 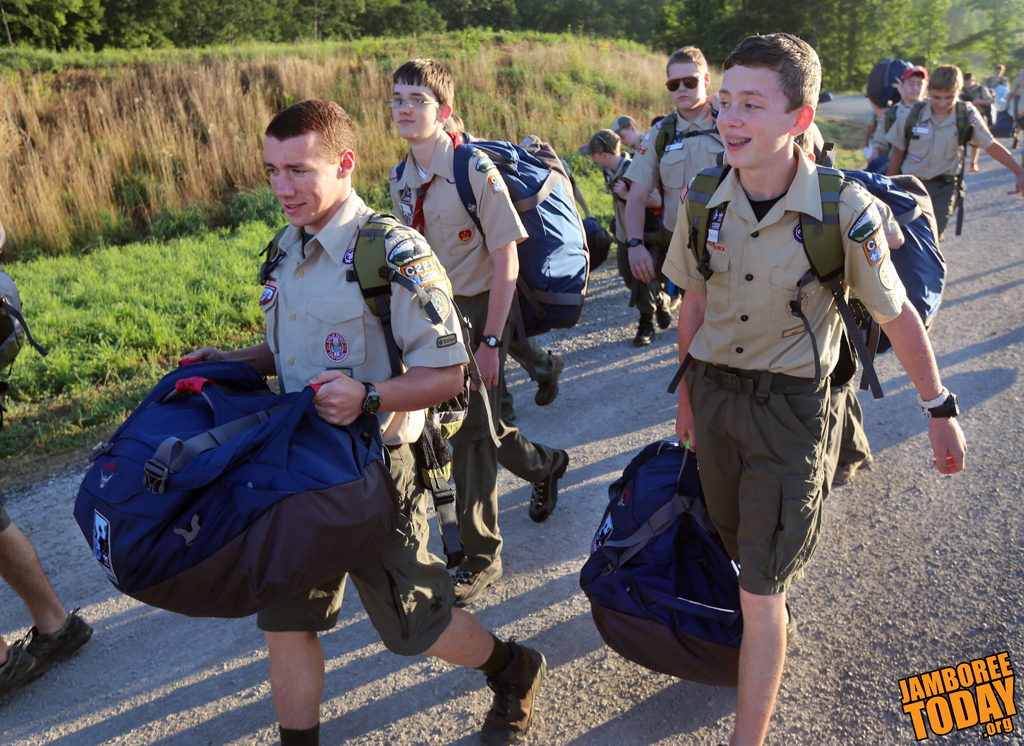 Once they retrieved their gear, sub camp Commissioner Terry Pew escorted Scouts and Scouters as they hiked a quarter mile or so to their campsite. However, on the way they were greeted by sub camp staff playing music with the help of plastic buckets and a narrow-bodied string instrument that sub camp chaplain Mark Dicken said is a "backpacker guitar."

At the site minutes later, Pew discussed the troop's site, how tents and canopies should be arranged and what to do with empty pallets and other waste.

For his part, Stiles helped set up tents (it was a group project), distribute and unfold green nylon Army-style cots and help erect dining canopies. 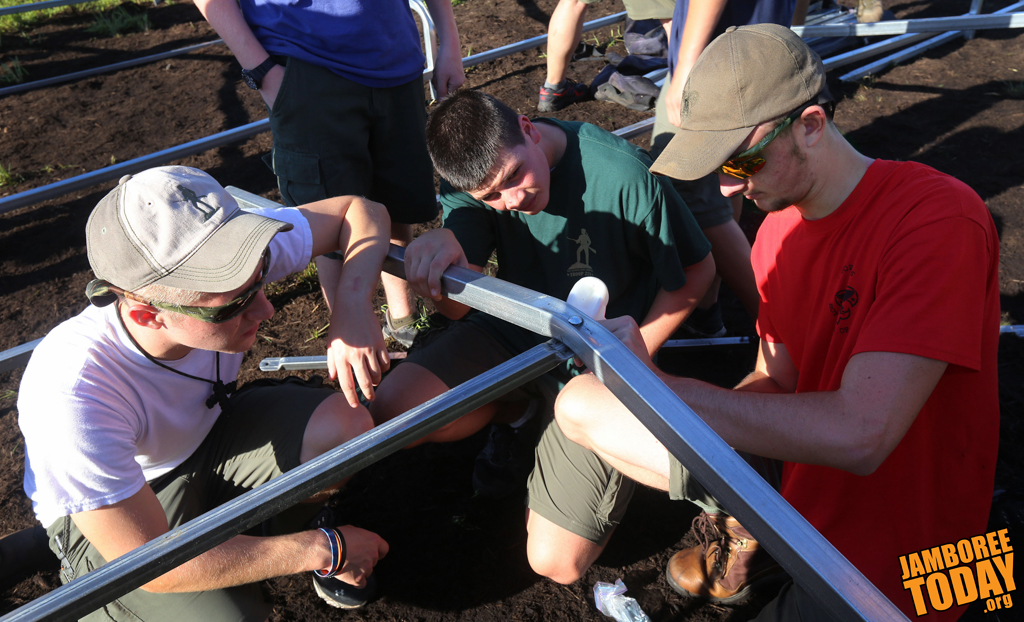 One tent he helped set up was the one he is sharing with Michael Williams, 16, an Eagle of Asheville, N.C.  Williams is the troop's senior patrol leader.

By about 9 a.m., the troop's camp was about 75 percent completed, according to Tim Mathews of Asheville, N.C., Stiles' jamboree Scoutmaster.

As for all of the other hundreds of buses, Marquis said they were expected to have dropped all of their troops off by 5 p.m.

"The jamboree has already been fun, and I can't wait for it to get even better," says Stiles.