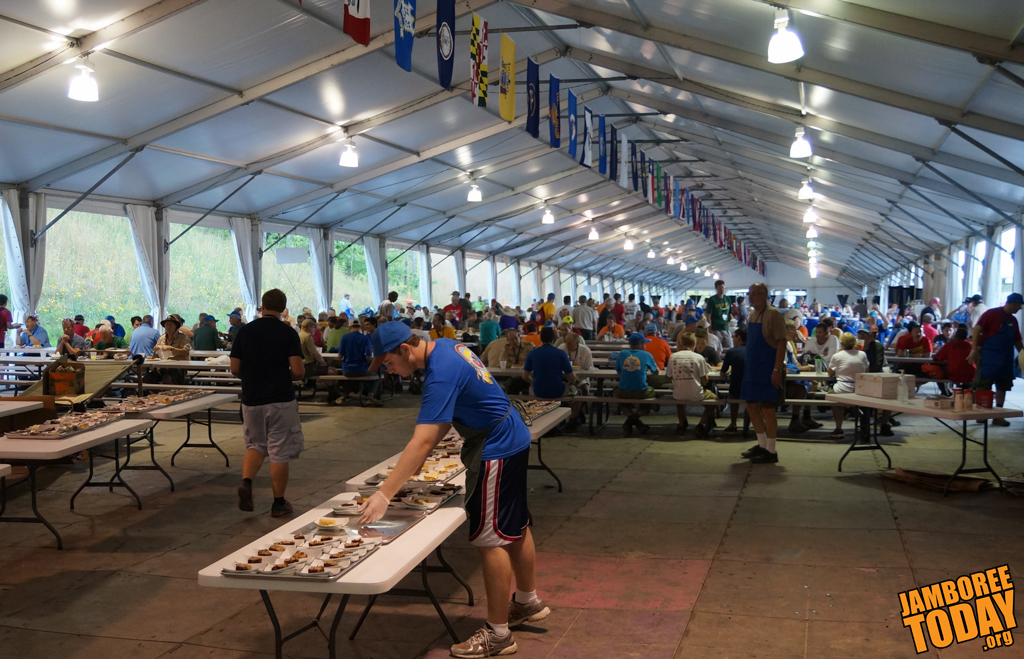 Feeding Staff is Food for Thought

"Some volunteer staff people are in the dining hall as early as two in the morning," says Connie Walker, manager for the staff dining facility in Base Camp E.

"Crews keep running until midnight. It's a big process" at the 2013 National Scout Jamboree, she says.

Although nearly everyone at the jamboree enjoys the meals, not many stop to think about the effort needed to prepare them for the 6,000 staff members who make the jamboree possible for the 30,000 Scouts and Venturers in attendance. Most of those staff members eat in the Base Camp E dining area and are offered three dinner entree choices. The dining staff works tirelessly throughout each day to prepare meals to accomplish the monumental task of feeding thousands.

Chefs have three kitchens to prepare food at the staff dining facility. There are six walk-in freezers, a trailer containing a large dish room, and three refrigerated trucks that make constant trips for restocking.

Compass Group, the largest food service contractor in the United States, provides and cooks the food. Other Compass customers include K-12 schools and government agencies. According to Walker the agreement with the BSA was made long in advance. Other staff include BSA employees, residents of towns around the Summit Bechtel Reserve, and volunteers from around the nation.

Despite the sheer amount of work that goes into providing food for the jamboree, the staff is upbeat.

"I really do enjoy getting people to the correct lines," says Berkheiser. "I'm a people person, so it's lots of fun."