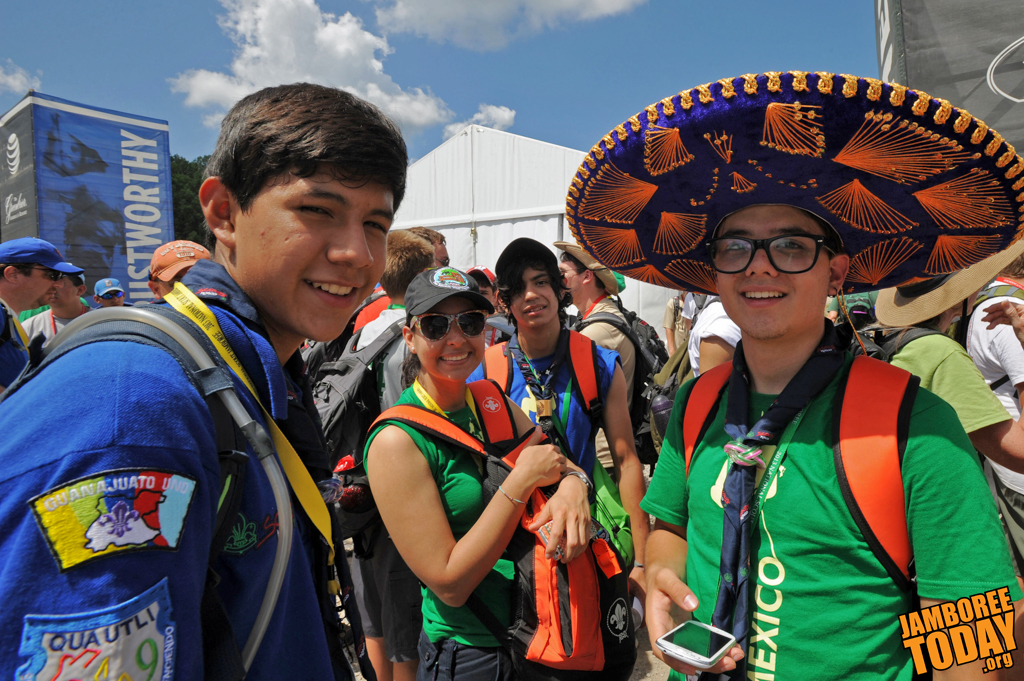 Scouts from Mexico mix with their American hosts at the Scott Summit Center during the 2013 National Jamboree. BSA photo by Jeff Hattrick.

"The hospitality is really good," says Aileen Forbes, a Scout from Kahrs, Sweden, who is attending the 2013 National Scout Jamboree. (In the headline, "Hej!" means "Hello!" in Swedish.)

In addition to the Scouts and Venturers from all corners of the United States, the 2013 National Scout Jamboree hosts Scouts from across the world. International participants and staff contribute to and enjoy amazing programs at the Summit Bechtel Reserve.

Most international Scouting programs are coeducational with only rare exception. Jamboree participants from outside the U.S. are therefore housed in Base Camp F with the Boy Scouts of America's Venturers, which also includes young men and women.

Before arriving at the Summit some foreign contingents included side trips to U.S. tourist attractions. Scouts from Saint Petersburg, Russia, for example, traveled to Gettysburg National Military Park in Pennsylvania to experience a bit of U.S. history.

In conversation with international participants and American Scouts and Venturers, the chat often explores differences and similarities about culture, history, and food. The weather is a frequent topic.

"The humidity has been the hardest," says Australian Scout Allistar Smith. Most northern hemisphere campers bask in summer warmth during July, but the Australians are in the middle of winter along with everyone south of the equator. Smith's hometown of Melbourne is still warm even in winter, but it's a "dry" heat, Smith says.

Other differences discovered include variation in the world Scouting movement.

"I even noticed the [Scout] Promise is different," commented Abigail La Doncei, a Canadian Scout from London, Ontario. (We call it the Scout Oath rather than the Scout Promise.)

However one says the Promise, international participants add to the Scouting fellowship at the jamboree.

The Scout Promise, as used by Scouts Canada

On my honour
I promise that I will do my best
To do my duty to God and the Queen
To help other people at all times,
And to carry out the spirit of the Scout Law.

The Scout Promise, as used by Svenska Scoutrådet (Swedish Guide and Scout Council)

Jag lovar att efter bästa förmåga följa scoutlagen.
(I promise to do my best to keep the Scout law.)

The Scout Promise, as adopted by the World Organization of the Scout Movement

On my honour I promise that I will do my best
To do my duty to God and the King (or to God and my Country);
To help other people at all times;
To obey the Scout Law.