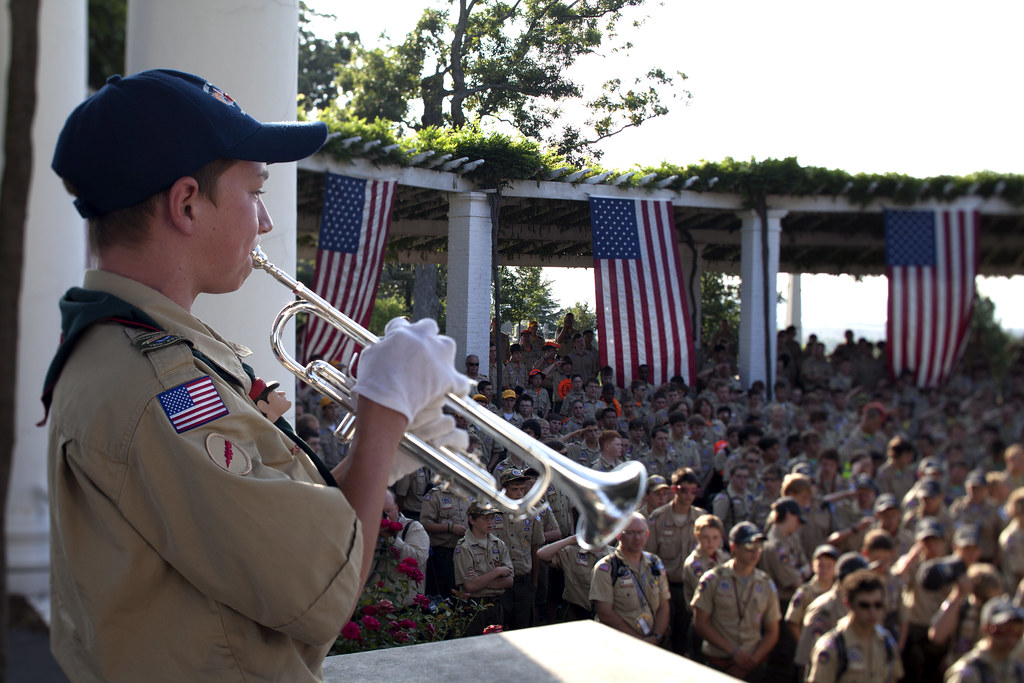 {rokbox title=|Jonathan Odekirk and Frank J. Befay IV, of Bay-Lakes Council, present a wreath to the Army honor guard at the Tomb of the Unknowns in Arlington National Ceremony in Arlington, Va., Sunday. About 200 Scouts and adult leaders from the local Bay-Lakes Council continued touring Washington, D.C., on their way to the jamboree. (Photo by Mike King)| float=|right|}images/stories/2010/0727/heroeshonored.jpg{/rokbox}“Don’t mess up,” the four Scouts repeated to themselves—and each other—as they prepared for their role in a unique and solemn ceremony of laying a wreath at the Tomb of the Unknowns at Arlington National Cemetery on Saturday.

Not only were they representing their fellow Scouts, they had just been told that families of American heroes were present.

Families United, an organization offering support to families who have lost love ones in Iraq and Afghanistan, were hosting a Weekend of Remembrance that coincided with the Scouts’ visit.

The four Indiana Scouts, John Hilt, 15, Eagle Scout from Lafayette; Trevor Shelhart, 15, Life Scout from Wheatfield; Mason Tribbett, 15, and Chris Wade, 14, both Life Scouts from Monticello; were sequestered as they replayed the instructions given to them. Individually and collectively, they repeated the mantra, “Don’t mess up.” They did not want to disappoint the families of the fallen heroes.

Across the way, James Lithgow, 14, Life Scout of Schaumburg Ill., instinctively straightened his uniform. Adjusting his collar, aligning his buttons and tucking the extra fold of his shirt into his shorts, he too recognized the significance of the ceremony. He wanted to look his best.

[blockquote class="alignleft"]The Scouts had done very well and we are grateful for their efforts.[/blockquote]

The four Hoosier Scouts solemnly, carefully descended the steps approaching the Tomb. Stopping at the designated position and the correct moment, Tribbett and Shelhart took the wreath from their guide, moved to the stand and lowered it on the stand. The red and white flowered wreath with its blue ribbon was in place.

Never turning their backs to the honored remains in the tomb they stepped back to where Wade and Hilt were standing. At the command to “present arms,” all present raised their hands in salute or to cover their hearts. Taps played.

Having completed their role, the Scouts withdrew and rejoined their troop. They questioned their actions. Was it OK? How did we do?

A family from Wisconsin, that had lost a love one to war, heard the Scouts were concerned that they had not done well enough. “The Scouts had done very well and we are grateful for their efforts,” the family said.

The Scouts did their best to honor national heroes and American families that have sacrificed so much. And their best was very much appreciated.