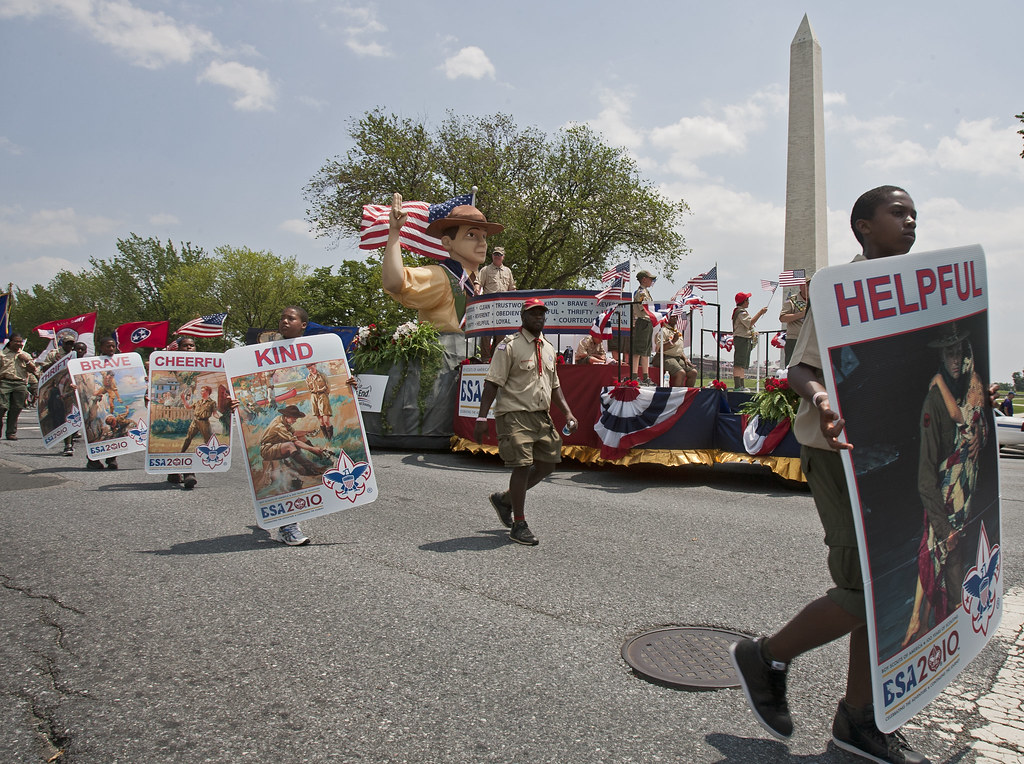 For the first time since the 1937 jamboree, Scouts marched along Constitution Avenue in Washington, D.C. The event was a two-mile long, two-and-a-half hour procession that highlighted Scouting’s centennial. The procession was divided into 10 “historic divisions” each representing a decade, followed by an Eagle Scout Division.

Antique cars, fashion and Scout uniforms for each time period were included. Five floats depicted the core principles of Leadership, Achievement, Service, Character and the Outdoors.

Scouts from all over the nation watched the parade as well as participating in it. “Light ‘em up,” said Life Scout Brad Sankey, challenging the driver of a red, 1930s era car to rev its engine. The reaction: a brief but throaty roar.

Sankey, 16, of Caspian, Mich., watched the parade with fellow Life Scouts Joshua Sampson, 15, of Sault Ste. Marie, Mich., and Robert Stenger, 14, of Lake Linden, Mich. All are from the Hiawathaland Council of Michigan’s Upper Peninsula and are attending the 2010 National Scout Jamboree, which opened Monday.

Despite the oppressive humidity and near-100-degree temperatures, the trio chanted proudly to Scouts in the parade. “That’s our Scout camp key word – enthusiasm,” said Stenger.

All three Scouts said they were looking forward to the jamboree, especially something called Mysterium Compass, which they said the Order of the Arrow will stage. They all said they want to experience it, even though they weren’t sure what it is.

Families from all around the nation, joined jamboree participants in watching the celebration as they considered what Scouting means to them.

[blockquote class="alignleft"]It’s a great day for Boy Scouting. It’s not often you get a parade down Constitution Avenue.[/blockquote]

Colton Wilson, 10, a Webelos Scout from Adamstown, Md., said that without Scouting there would not be as many good deeds and the world would be a lot meaner.

His mother, Webelos Den Leader Sherry Wilson, believes Scouting is one of the last organizations, besides churches, that teach life skills and values. “It helps them to grow up with values and discipline into a good adult,” she said. “Scouting uses activities that are fun and adventurous. They learn by doing.”

Collin Petruska, 12, a Star Scout from Gastonia, N.C., said that without Scouting boys would not have the opportunity to get together and be themselves. “When we play football, we have to fit into the team,” he said, “And there is less chance to try things out.”

Chief Scout Executive Bob Mazzuca, who was riding in the parade, told Jamboree Today that the centennial jamboree is “going to be the greatest show on Earth. I can’t wait to be there.” He wouldn’t have to wait long; he said he would travel to Ft. A.P. Hill immediately after the parade.

BSA National President Rex Tillerson, seated in a 1902 Oldsmobile, said, “It’s a great day for Boy Scouting. It’s not often you get a parade down Constitution Avenue.”

The parade was only part of the formal and informal Scouting activities in Washington over the weekend. After playing his bagpipes as he led the parade’s United Kingdom contingent, Bill Hadden, a Scouter from Troon, Scotland, staged an encore near the Washington Monument. Scouts who had circled closer roared their approval as his traditional “Scotland the Brave” transitioned into the theme from Star Wars.

{rokbox title=Life Scout Andrew Darland, from DeWitt, Iowa of Illowa Council Troop 1109 cools himself off in a fountain near the Washington Monument Sunday. (Photo by Daniel Giles)| float=|right|}images/stories/2010/0727/washingtonmonument.jpg{/rokbox}

Explorer Guilherme Ribeiro, 12, of Valinhos, Brazil, said that he enjoyed the 1930s cars and clothing. He said that he felt sorry for the people in the heavy, dark period clothing.

Adult Scouters Bill Buttenshaw, Culpepper, Va., and Grant Cauthen, Alexandria, Va., were among those dressed in 1970s heavy cotton, olive drab long-sleeved uniforms that they had crafted themselves. The badges and insignias were found on the Internet. They said that re-enacting helps younger Scouts perpetuate the commitment to citizenship that the founding fathers set up.

Music came from a woman driving a self-playing calliope, a Civil War marching band, and the Racine, Wis., Drum & Bugle Corps. Closely watching the bands in the parade, Chad Begley, 17, a visiting Life Scout, saw a band execute a ripple wave from front to back that he thought he might take back to his high school band in Somerset, Ky.

Among other parade features: