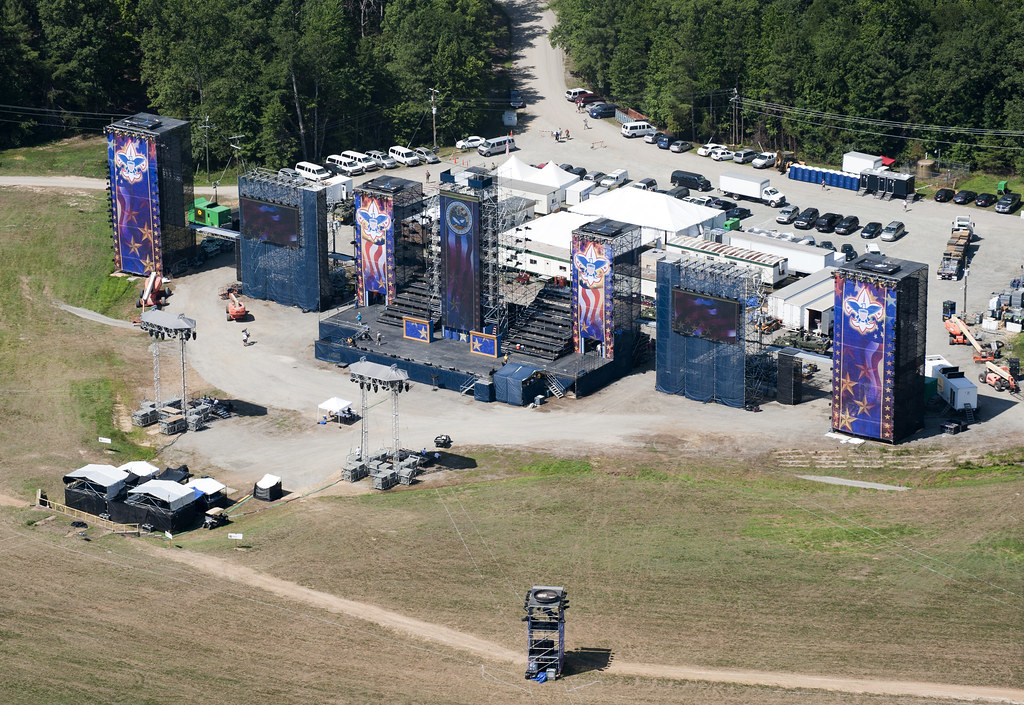 Backstage pass: Arena shows not as easy as they look

Arena shows don’t just happen. They take hard work, talent an audience can embrace, and tons and tons of equipment.

“The shows this year are very dynamic—from parachute jump teams to musical acts to the largest fireworks display ever launched on a military base,” said Darin Kinn of Dallas, assistant director of arena shows. “Our pyrotechnics team interfaces with the command group in the military that authorizes the show,” he said.

The volume of equipment needed to stage these shows is dramatic. More than 4,000 nails and screws were used to fasten more than 17,000 parts of the stage, which now stands 395 feet long—longer than a football field. Ballast to stabilize the stage includes 26,000 gallons of water and more than 35 tons of concrete.

As for lights, the jamboree arena shows will use more than you’d see in a Broadway show.

When it comes to people power, more than 150 arena staff put on the two shows on Wednesday morning and Saturday night, controlling audio, video and lighting: “All the typical groups that put on a terrific show,” Kinn said.

Among those helping is Robert Garner, 17, a Life Scout of the Longhorn Council in Lewisville, Texas. He is working as talent coordinator. So far, he has helped lay cable and assemble the gargantuan stage. Later, he will attend to the needs of entertainers, including the coordination of their backstage movements.

Garner has an added motive for working at the arena. He plans a career as a professional audio technician.

Other volunteers have been placed with technical crews to get real-world experience. “They’ll push the buttons and turn the levers to bring these shows to life,” Kinn said.

[blockquote class="alignleft"]The shows this year are very dynamic—from parachute jump teams to musical acts to the largest fireworks display ever launched on a military base.[/blockquote]

For the past two years, the BSA and vendor Corporate Magic have been developing the shows. Since July 14, 56 BSA staff volunteers and nearly 100 people from Corporate Magic, which has produced halftime shows for the Dallas Cowboys and the Super Bowl, have been assembling the stage and video and sound systems.

The Order of the Arrow Service Corps is also helping on the project; members will serve as ushers at the shows.

This centennial event is the first jamboree experience for Kinn, a professional Scouter who works in the BSA’s marketing group in Irving, Texas. According to Kinn, stage and equipment assembly have gone “very smoothly, no issues, no accidents. We’re following BSA [health and safety] procedures.”

“I’m not nervous. I’m more excited,” Kinn said. “The nervouness is gone, and the excitement is building.”

For the first time, the arena staff will conduct free backstage tours for participants and visitors alike.

No reservations are needed for the free backstage tours, which run every half-hour from 10 A.M. to 4 P.M., Tuesday through Saturday. Each participant will receive a patch after the tour.