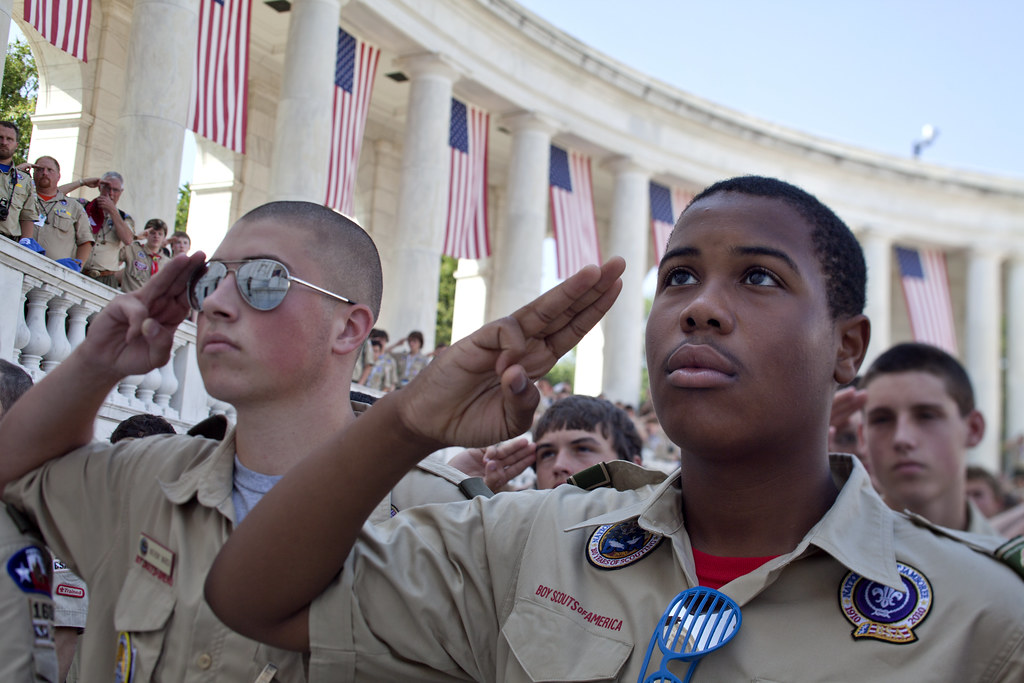 WASHINGTON, D.C. — Scouting’s beginnings melded with American history as hundreds of Scouts bound for the centennial 2010 National Scout Jamboree saluted the Unknown Soldier, eyed words of presidential wisdom and winged their way through the halls of flight and space history.

For the Scouts of jamboree Troop 1818 of the Los Angeles Council, Saturday began with course leader Dave Murray of Worldstrides, an educational student travel company, telling them of the deep, varied background of Arlington National Cemetery. Diallo Whitaker, 15, Star Scout from Hawthorne, Calif., learned that among the 170,000 graves of soldiers killed in battle since about 1862 were the final resting places of such figures as civil rights activist Medgar Evers and boxing champion Joe Louis.

“I got more information today than I knew before” about those men, said Whitaker.

[blockquote class="alignleft"]It’s important to remember these people because [what they did] made a difference in people’s lives.[/blockquote]

At one point in the tour of the cemetery, Murray drafted Scouts to share his notes with the others. Those volunteers included Bradley Greer, 16, Star, of Downey, Calif.; Frankie Lewis, 15, Life, of Whittier, Calif.; and Zac “Attack” Johnson, 16, Star, also of Whittier.

Select Scouts from across the country had opportunities to participate in one of the most meaningful ceremonies held at Arlington: the laying of a wreath at the Tomb of the Unknowns. Having petitioned a year ago for the honor—and wearing white gloves—several quartets of Scouts throughout the day assisted in the observance.

Although many Scouts have shared the honor of participating in the rite, it never loses its meaning and remains a dignified fulfillment of the American peoples’ promise to those service members who have fought to defend the U.S. constitution.

Beyond Arlington’s neatly manicured grounds, other Scouts found meaning in the monuments to others who built this country.

Outside the Lincoln Memorial, Kerry Joiner, 12, First Class Scout, of Lucas, Texas, said he was moved by the monuments he visited. But his most interesting activity Saturday was the National Archives. There he learned how the founders “created the nation” with the “Declaration of Independence and all the other constitutional artifacts.” Joiner said he plans to attend law school someday.

“I’m going to try for Yale, but you never know,” he said. “I want to be a politician,” and become a person who would “debate, protect and lead their country.”

Meanwhile, at the Korean War Memorial, Shourya Kumar, 13, Life, of Dallas, was awed by the artistry of the monument’s etched- stone mural.

“It’s almost like it brings you into it,” Kumar said, suggesting a 3-D type of reality. “It almost grabs you” because it’s so realistic.

Between Kumar and the mural was a cadre of sculptured Korean War soldiers, spread out as if on battlefield patrol. “They’re so appealing, dramatic, recognizable,” Kumar said. “It’s important to remember these people because [what they did] made a difference in people’s lives.”

{rokbox title=|Scouts mill around during the Bay-Lakes Council contingent’s first stop at the Lake Forest Oasis in Lake Forest, Ill., north of Chicago, early Thursday morning on their way to the 2010 National Scout Jamboree. (Photo by M.P. King)| float=|right|}images/stories/2010/0727/loadingbus.jpg{/rokbox}

Down the National Mall a bit farther, Scouts Ed Dixon and Brian Camp of the Oklahoma City- based Last Frontier Council were posing for a photo in front of the Oklahoma name at the World War II Memorial.

Dixon raised his arms in an “O,” Camp in a “U.” Both plan to attend Oklahoma University this fall. But, while they were enjoying themselves, the pair understood the memorial’s meaning.

"We wouldn’t be here without veterans in general,” said Dixon.

Camp said the war was a turning point in world history: without defeating the Axis powers, the world would “be worse today if that war hadn’t been won.” World War II is “one of my favorite things to study” in school.

Even late Saturday afternoon, Scouts continued walking Washington’s cultural and historical trail, specifically at the Boy Scout Memorial, near the Ellipse. Flanked by the bronze figures of “Manhood” and “Womanhood,” a Boy Scout leads this mythical couple into the future.