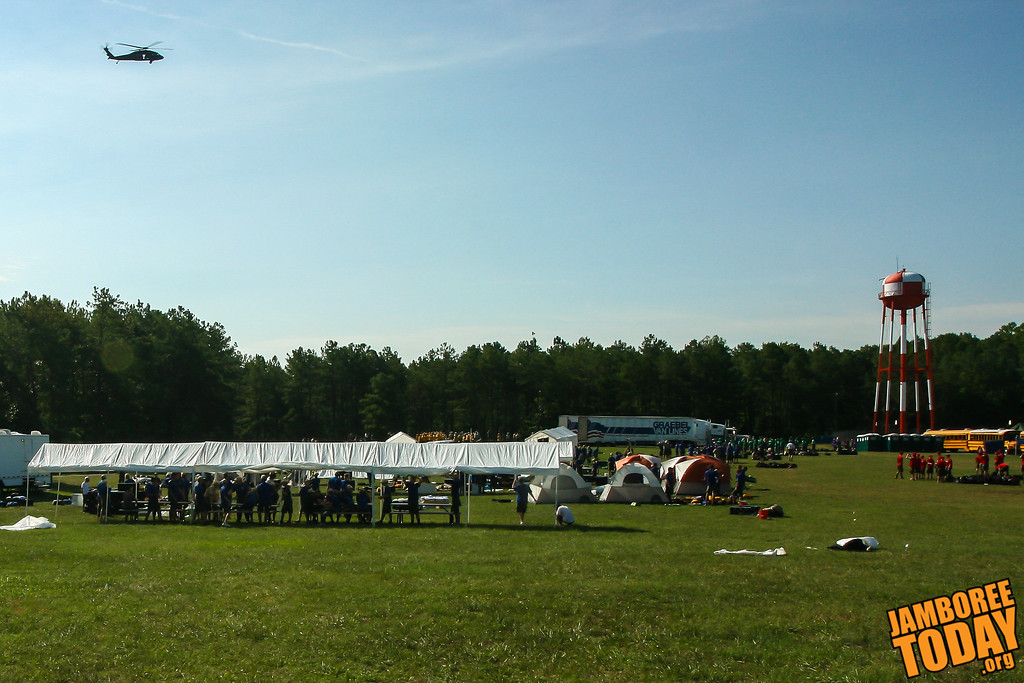 A Scout is Helpful: Helping now helps our future

The walls shuttered as a low-flying U.S. Army Black Hawk helicopter hovered above the 2010 National Scout Jamboree this morning. The shooter on board had Boy Scouts and his sights. The trigger was pulled—and a smiling Scout was captured on (digital) film forever.

Floating in the sky, the shooter was one of the several extremely experienced professional photographers volunteering their time to document the centennial jamboree. He and his colleagues have been hiking the jamboree grounds capturing signature Scouting moments as the staff prepares for the arrival of 45,000 campers tomorrow morning.

The photographer’s stunning overhead shots would not be possible without the helpful support of the U.S. Army pilot and air crew providing his very special shooting platform.

Flying Boy Scout photographers around isn’t the only detail undertaken by the fighting men and women on hand at the jamboree. The military installation Fort A.P. Hill has hosted each National Scout Jamboree since 1981, and the support of the uniformed services of the United States has been invaluable.

Today, I received my media credentials from a Navy seaman detailed to the press corps. Army commanders collaborate with Boy Scout jamboree managers to assure preparedness for many potential emergencies. Corpsman team up with Scout physicians to provide medical services. Military police officers patrol the grounds with a friendly smile and assure everyone’s safety. The MP I met yesterday told me that he attended the 2005 jamboree as a Scout, and that he is proud to be able to serve the Boy Scouts again in his new role as a soldier in the U.S. Army.

There are Coast Guardsmen and Air Force officers on site as well, although not everyone wearing the uniform of the United States is in the military. Officers from the U.S. Public Health Service are also present. These personnel are commissioned just like their military counterparts, with the Surgeon General as their CO, are providing logistical and analytical support to assure the health and safety of all jamboree participants and staff.

What’s the cost of all this help? Absolutely nothing.

America’s soldiers, sailors, marines, airmen, guardsmen, and the officers of the uniformed services serve their country with distinction all over the globe. They work overseas and domestically to keep our nation strong, and their helpful service at the 2010 National Scout Jamboree is a continuation of this mission.

Whether or not one agrees with the politics of our nation’s involvement in foreign affairs, it is indisputable that American servicemen and women have stepped up to the challenge of protecting civilians in danger, feeding the hungry, and helping people world wide recover from terrible disasters. Often they undertake these helpful humanitarian responsibilities at risk to their own lives, so that others may live better.

One hopes that no one’s life is in danger at the jamboree, there are certainly a lot of lives on the line. Thousands upon thousands of young men (and a few young women) from all over the country will be having the time of their lives, meeting one another and enjoying once-in-a-lifetime activities.

These lives are precious. They are the future of our nation and our world.

Like the MP who was once a Scout and now works to protect our freedom, the Scouts at the National Jamboree will go on to be come leaders in society. Their Scouting experience develops their ability to be effective citizens, and enhances their contributions to their communities. They become helpful.

The government’s investment in the National Scout Jamboree is just that, an investment. A wise one, at that, assured to pay off big down the line.

In the coming days, hundreds upon hundreds of Scouts will earn merit badges at the jamboree that teach skills in financial responsibility, ethical decision making, and community stewardship. The jamboree supports this learning unlike any other event, giving Scouts immediate opportunities to explore these ideas with others from across the nation and strengthen their understanding of the complexities of these topics.

By helping our Scouts now at the National Scout Jamboree, they will grow up to help others. The product will be a better America and a better world.

This week and next, I plan to blog about Scouting’s main principles as set out in the Scout Motto, Scout Law, and Scout Slogan.